Tel Aviv grew physically from 6,500 dunams to 36,000 dunams between the years of 1936 to 1948 as the population grew from 12,000 to 345,000 inhabitants between 1922 and 1953. During this period, thousands of buildings in the ‘Bauhaus’ international style were built. Israel Rokach, Mayor of Tel Aviv from 1936 to 1953, created municipal projects enabling the enlargement of Tel Aviv city limits, prepared city plans, laid out new neighborhoods, and constructed public buildings. The exhibition displays documents relating to Rokach’s work in Tel Aviv while he was the Mayor. 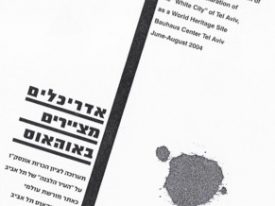 Category : 2014
An exhibition on the occasion of UNESCO’s decleration of the White City of Tel Aviv as a world heritage site....
Cart 0
0
@
Accessibility
cancel accessibility
Provided by: