The Bauhaus School in Germany 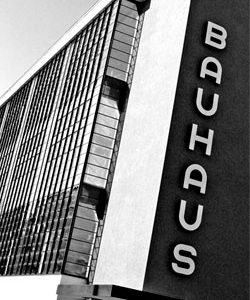 The building of the Bauhaus school in Dessau, Germany

Bauhaus was founded by Walter Gropius in Weimar in 1919. The period after the First World War was marked by major political and social changes in Europe and especially in Germany. Gropius, who throughout his life suffered from the traumatic experiences of the First World War, was determined to take part in the creation of a better future. With the founding of Bauhaus, art and architecture education was to be revolutionised. Walter Gropius created a “classless” academy where so-called “masters” taught instead of “professors”. It is thanks to Gropius’ charisma that he was able to win famous contemporaries for this academy. Among them were Josef Albers, Hermann Bayer, Max Bill, Marcel Breuer, Johannes Itten, Wassily Kandinsky, Paul Klee, Hannes Meyer, Laszlo Moholy-Nagy, Ludwig Mies van der Rohe, Gunta Stölzl, etc.

As a pedagogical innovation, the school introduced the “preliminary course”, which is known today at most art training centres. In this course, students are introduced to a wide variety of materials and learn how to use them informally. Only then do the students begin with the actual training. The Bauhaus school offered courses in architecture, bookbinding, graphics and advertising, painting, metal, furniture, painting, sculpture, theatre, pottery and mural painting. They also included photography, dance, typography etc.

Development Of The School

In its only 14 years of its existence, the Bauhaus went through various developments. In the years of the Weimar period, the focus was mainly on arts and crafts; later, after the move to Dessau in 1926, the main emphasis was shifted to the industrial creation of products (“art and technology as a unit”). Only from 1927 on, architecture became a teaching subject.

The name “Bauhaus” is derived from the medieval “Bauhütte”. The “Bauhütte” used to be located next to the cathedrals under construction and offered the craftsmen involved in the construction-work common housing: stonemasons, painters, carpenters, locksmiths etc. worked side by side on the emerging “total work of art”, the cathedral. Gropius saw his art school as a training centre for artists of different orientations, who through their work participated in the “Gesamtkunstwerk” of architecture.

The Struggle And End Of Bauhaus

As an architect, Walter Gropius had the opportunity to build modern houses even before the founding of the Bauhaus. A department for architecture at the Bauhaus was only opened in Dessau in 1927 under the direction of Hannes Meyer. Meyer served as the second director at the Bauhaus school between 1928-1930. During this time, the school became increasingly political compared to the early years, as socialist Meyer propagated the idea of “people’s needs instead of luxury needs”.

Under pressure from the authorities, Meyer left the Bauhaus school in 1930 to participate in the set-up of the socialist system in the Soviet Union. With him, an entire group of other “Bauhäusler” moved to the Soviet Union; they were called the Bauhaus Brigade “Red Front”. The “industrial design” was successful under Meyer and also brought financial subsidies.

Ludwig Mies van der Rohe was the last director of the Bauhaus school from 1930-1933. He tightened the educational concept to six semesters and saw the training of architects as the central task of the school. Under the political pressure of the National Socialist government in Dessau, the school was closed in 1932, only to remain open in Berlin for a few months afterwards.

In 1933, the Bauhaus school under Ludwig Mies van der Rohe was finally closed for political and economic reasons. After the war, various schools in the USA as well as in Germany saw themselves as successor institutions of the “legendary” Bauhaus.

The Bauhaus Centenary In 2019

To mark the 100th anniversary of the Bauhaus (2019), three new Bauhaus museums were opened at the former locations in Weimar, Dessau and Berlin. The Bauhaus Center Tel Aviv was founded in 2000. 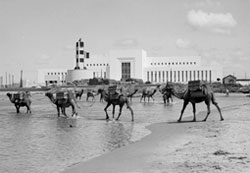 Modern white buildings rise from the sand in Tel Aviv

Speaking of the “Bauhaus style” in Israel, one generally refers to the so-called “International Style”, “Modernism” or “New Building”.

Due to the escape and expulsion of Jews from Germany and Austria in the 1930s, a wave of new immigrants came to the then British Mandate of Palestine. For this reason, there is a particularly large number of buildings in the at the time modern “International Style” or simply “Bauhaus Style”- also in international comparison.

The largest collection of them can be found in the “White City” of Tel Aviv, which was declared a UNESCO World Heritage Site in 2003. Further “Bauhaus” buildings are located in most other cities of the country, in kibbutzim and moshavim, as well as in the Arab cities and villages.

“Founded in 2000, the Bauhaus Center is a dynamic mix of exhibition space, museum and a shop dedicated to Bauhaus-influenced and original Israeli designs…” – HAARETZ

“Shlomit Gross loves her city. The co-founder of the Bauhaus Center in Tel Aviv shares her enthusiasm with the groups of tourists she takes through Israel. Most of them want to see Jerusalem, Haifa or Lake Genezareth. Unfortunately, only very few are aware that Tel Aviv has one of the largest collections of Bauhaus buildings…” – DW DEUTSCHE WELLE