This exhibition shows modern architecture from the 2000s in Tel-Aviv and surroundings. The 11 examples represent public buildings with an “icon” character. The following items, photographed by Noya Zeltser, are on show: 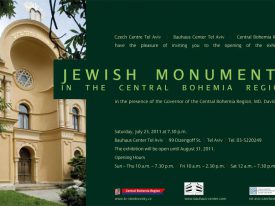 Category : 2011, Architecture, Documentary, Photography
Since the Middle Ages, Jews have been actively involved in the culture of Europe. In addition to Prague, they settled...
Cart 0
0
@
Accessibility
cancel accessibility
Provided by: